Work your mental math magic to find equations hidden among nine number cards. Keep what you find and collect the most cards to win!

There are 100 cards in the deck, each with a single number on it between 0 and 100. For optimal fun, certain cards appear more than once, like the mental-math-friendly single digits. Others, like the more reclusive primes, don’t appear at all.

One player volunteers to be the dealer, shuffles the deck, and then places nine cards face up as a 3-by-3 grid in the center of the table.

Since the game is a little harder for the dealer, you could try having all players be dealers at the same time, with each holding on to a portion of the deck and taking turns flipping new cards over.

At the same time, all players (including the dealer) study the cards in the grid and try to create an equation using at least three cards and as many math symbols as needed. For example, the cards 2, 4, 7, and 1 above could be arranged to make 2 + 4 = 7 - 1.

Only addition (+), subtraction (-), multiplication (x), division (÷), and square roots (√) are allowed, but they can be used in any way necessary! Players can add as many of these symbols (plus parentheses) in any order needed to make the math work. However, each number card can only be used once in a given equation, and numbers not on cards in the grid cannot be used at all.

When a player finds an equation, she shouts the result, such as “Six!”, which immediately locks out all other players and gives her a chance to prove that the math works. If the proof checks out, she takes the three or more cards that were involved and keeps them in front of her.

Remember to shout the resulting number of the equation rather than anything like “Got it!” or “Found one!”. If you don’t shout the number, you don’t get your lockout and someone else can jump in!

Players should be careful not to shout a number unless they’re ready with a proof! If their math is invalid, if their proof’s result is different than the number they shouted, or if they take more than about 10 seconds while showing their proof, they lose their lockout and have to wait 10 more seconds before they can try again.

Every time an equation is found, the dealer replaces the cards that were taken with n ew ones so that there are always nine cards face up in the center of the table. If at any point before the deck runs out players are stumped and can’t find any more equations, the dealer can add 3 more cards to the table.

If you find an equation while the dealer is dealing, that’s OK! Shout the result as usual, stop the dealer from dealing, and proceed to show your proof as usual.

Players continue finding equations until all the cards in the deck are used up and no more equations can be found.

Once all the cards in the deck are gone and no more equations can be made, the game is over and players count up their points. Each card is worth 1 point and the player with the most points wins!

Let's imagine we're playing with these 9 cards. Here are some examples of equations that can 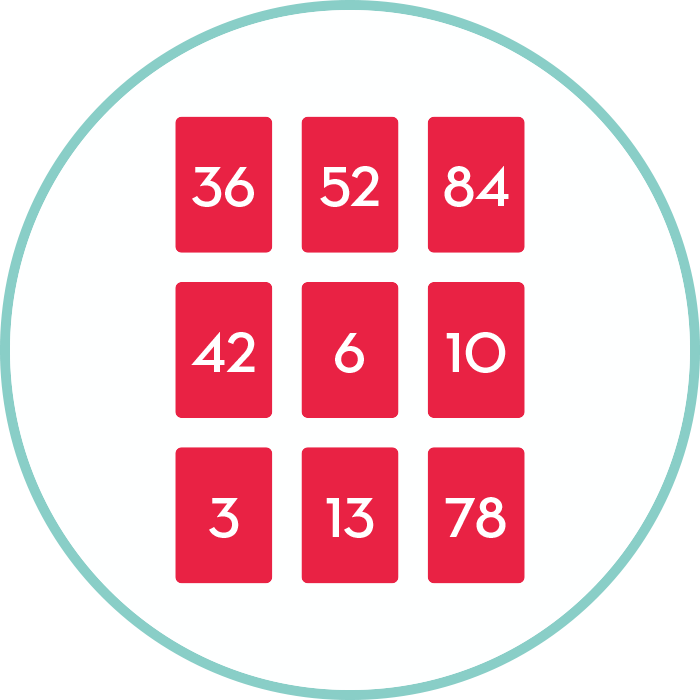 Take that mental math magic to the next level with this solo challenge! It plays exactly like the classic game, but the lone dealer now times himself to see how quickly he can make it through the deck on his own. Getting a seriously fast time earns some serious bragging rights.

Some younger players may be advanced enough to rival even adults, but small modifications may be needed for others to make the game more accessible and fun. Depending on players’ skill levels, try one or more of the following:

When playing without any adults, the young dealer may also enjoy sitting out of the game and acting as a moderator, getting to decide who shouted what number first and making sure everyone’s math checks out.

Jumpstart your brain every Monday when we post a new set of nine cards that hides a challenging equation. Can you find the proof?

From the makers of Proof! comes the brand new math game, Adsumudi! Find the secret math path to Adsumudi's answer on each card by adding, subtracting, multiplying, and dividing the other numbers. Find it first and collect the card. Five cards wins!